Via the Rochester Business Journal

Perhaps one of the greatest draws of the Luminate NY incubator is the diversity. There is no focal point, no central tech concept outside the use of light and imaging, which binds the 10 companies now calling the incubator home. But, ultimately, there is one common goal; to get more companies to come to Rochester, and LighTopTech is eager to make that happen. 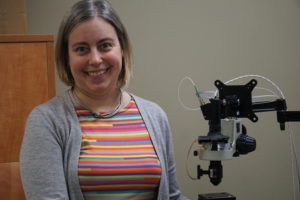 Co-founded by President Cristina Canavesi and chief technology officer Jannick Roland, both hold roots in the Flower City. Roland is a professor of optical engineering at the University of Rochester. She is also director of the Robert E. Hopkins Center for Optical Design and Engineering at UR and the director of the Center for Freeform Optics, a collaboration between UR and the University of North Carolina at Charlotte. Canavesi received her master’s degree in technical entrepreneurship and management from UR’s Simon Business School and a Ph.D. in optics from the university’s Institute of Optics. Roland was her mentor.

“We’re really lucky, because we’re already committed to Rochester. We felt that we already know Rochester,” Canavesi said. “But being part of the (Luminate) program, the workshops, getting connected to the network of mentors—it’s been tremendously helpful in just the four months that we’ve been through it.”

Ultimately, LighTopTech plans on setting up its permanent manufacturing hub in Rochester, although that may be a bit far off. The company has just completed its first prototype using the technology invented by Roland. Dubbed Explorer4D, or “nondestructive/noninvasive three-dimensional imaging with Gabor-domain optical coherence microscopy,” the platform allows for medical professionals to look below the surface of the skin and examine cellular structures without making an incision. For patients fearing cancer, that means getting the results of a biopsy without actually undergoing a biopsy, producing both two and three-dimensional images.

At least, that’s the ultimate goal. The prototype, right now is designated primarily for research, following on several grants and awards in the past few years, including $925,999 from the National Science Foundation’s Small Business Innovation Research grant in 2015.

“The instrument that we have right now is our first product, for research applications and general purpose microscope,” Canavesi said. “Our end goal is medical application, medical imaging, virtual optical biopsy. For that, we are actually partnering with a surgical microscope manufacturer, so they will integrate our system into a conventional surgical microscope, which is what surgeons use while operating to get a magnified view of the surgical field.”

Canavesi has hopes for LighTopTech and Explorer4D to enter the medical sphere next year, filling what she sees as a critical area in the world of medical tech.

“With our instrument, they’ll be able to see below the surface, so they’ll have a wealth of information to help them make decisions during surgery, instead of what they’re doing now,” Canavesi said. “They usually take a (tissue) sample (during surgery), they send it to a lab, but then they finish the surgery, get the results back and find out they may have to do another surgery, because they haven’t taken all of the cancer out in the first round.”

When applied to the world of cancer, Canavesi sees LighTopTech being able to make biopsies almost obsolete. Rather than having to be cut open, have tissue sent to a lab and wait for results, the patient can be put under the microscope and have their results back on the spot. No cuts, no stitches, no pain.

“You won’t have to go through all of that pain and all of that wait,” Canavesi said. “You’d be able to get imaging, no cutting, and get the results right there at the doctor’s office.”

There are certainly other applications for the technology LighTopTech is producing. Manufacturers, for example, can be given the opportunity to take subsurface looks at their plastics or glass to check for any errors invisible to the naked eye. The resolution available with LighTopTech’s device goes down to two micrometers for both synthetic and organic materials. For comparison, the diameter of a human hair averages around 75 micrometers.

But above all, LighTopTech’s goal is to simply help others, fueled by compassion and sympathy stemming from personal biopsy experiences among the co-founders. And while the company now faces the daunting task of heading to market, establishing partnerships and building a full-fledged business, the mission remains the same. If their technology can eliminate pain, Canavesi said, then they’ve reached their goal.

“Really, our goal is to see this technology helping people and making lives better. We’re heading in that direction, but we’ll be really successful when we accomplish that,” Canavesi said. “That’s how we measure our success—it’s in making an impact on other people’s lives.”

Ten companies composed of some of the brightest minds in the field of optics, imaging and photonics are fine-tuning their technologies inside NextCorps’ Luminate accelerator. The winners of November’s first Lightning Awards, these companies each received $100,000 in funding, free residency in the accelerator and access to High Tech Rochester’s web of resources and mentoring. In June, the most promising of these 10 will receive a total of $2 million in follow-on funding. Leading up to June, the Rochester Business Journal will feature profiles of the companies holding the keys to the next chapter in Rochester’s history as the world’s imaging center.