“With our solution, we can potentially reduce [dismounted warfighters’] battery load by 75%, which enables them to carry more water or other things they need to perform their mission.”

Drones, vehicles, and people that need power on the move are weighed down or held back by current solutions. Batteries have low energy density, and other power sources like grid, solar, and wind are not always available or practical.

Veronika Stelmakh, PhD, Co-Founder and CEO of Mesodyne, shares how her team took technology out of the lab and into the field to transform how power is generated in challenging environments.

What solutions are available now for portable power generation?

[VS] Portable power is primarily achieved with batteries, which are only good for short endurance. If you’re trying to accomplish a mission that’s longer than a few hours, you end up having to bring a lot of batteries. On the other hand, internal combustion engines use hydrocarbon fuel which is 60x more energy dense than batteries, but they’re bulky, noisy, and they produce smells and smoke. If you attempt to miniaturize them, they lose their efficiency and break down after less than 100 hours. Think of it like a weed wacker engine — that’s what a small internal combustion engine looks like. It’s very loud and not reliable.

Fuel cells have been developed to try to bridge the gap between batteries and internal combustion engines, but they require specialized fuels. If the fuel is not the right purity, it can degrade the performance of the fuel cell. Alternative energy like solar is great, but it’s not always available and it takes up a large footprint. So there’s really no compact high energy-density power generation solution. That’s what we are developing at Mesodyne.

How does your technology work, and who benefits?

[VS] Mesodyne is building a new kind of power generator. We call it the LightCell™ power generator, because it converts any fuel to electricity via light. It enables reliable, compact, quiet power generation anywhere, anytime, from any fuel.

My co-founder, Dr. Walker Chan, and I developed the technology at MIT’s Institute for Soldier Nanotechnologies with the soldier in mind. We are initially focusing on specific military applications where there is a clear pain point as well as willingness to pay. For one, dismounted warfighters have a critical need — they’re carrying communication equipment and they’re in austere environments without access to power. With our solution, we can potentially reduce their battery load by 75%, which enables them to carry more water or other things they need to perform their mission, rather than carrying hundreds of pounds of batteries (as a squad). 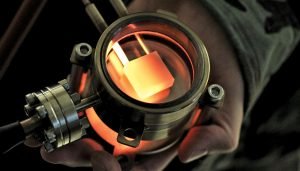 As we demonstrate the technology and bring the cost down, we’ll be able to go after broader industrial and even consumer markets for affordable power generation.

How did the Mesodyne team form?

[VS] I started my Master’s at MIT in Optical and Quantum Communications, but I had worked in the power electronics industry before that. I changed research groups from my Masters to my PhD after I found Dr. Ivan Celanovic’s Thermophotovoltaic research group, which combined my interests in optics and power electronics. That’s where I met my co-founder Walker, who was working with the group already.

We founded Mesodyne shortly after we demonstrated the world record efficiency for thermophotovoltaic energy conversion at MIT in 2017. At our advisors’ recommendation, we took entrepreneurship classes, started to conduct customer interviews, and saw real interest in the technology. It seemed like it could be a company, and if we weren’t going to take this out of the lab and into the real world, nobody else was going to.

What has helped move Mesodyne forward?

[VS] We look for programs that provide funding and opportunities to expand our network, and one has led to the next as we’ve moved through different stages of growth. At MIT, we participated in Sandbox and delta v, which led us to the MIT I-Corps Node, which led us to the National Science Foundation’s I-Corps program. From there Mesodyne participated in Chain Reaction Innovations, the WERCBench Labs Accelerator, the Air Force Techstars, the Air Force Mass Challenge, and now Luminate.

When we joined Luminate, the goal was to expand our network, specifically in optics and photonics. One of our challenges is the fabrication of our nanophotonic material and how we can scale that and bring the costs down. We’re using standard semiconductor tools with a non-standard process. Typically, the foundries that have this kind of equipment are not willing to do more exploratory processes — and vice versa, the clean rooms that do exploratory processes don’t have the right tools to enable the scaling and cost reduction we’re looking for. Through Luminate, we’re getting closer to finding a potential partner for this fabrication. If there is no clear partner, we may need to build our own facility, but the experience and connections have nevertheless helped us understand our path forward.

Any advice for startups or entrepreneurs?

[VS] The biggest lesson for us has been that innovation takes time and people. It’s important to make sure you have a great team and everyone’s on the same page in terms of commitment, because these things don’t happen overnight. We wouldn’t be here today if we hadn’t had all the support of MIT, our academic advisors, accelerators programs, and government agencies. Cultivate relationships at all the different stages of starting your business, because without people and resources, you’re not going to be able to move forward.