Leverage Your Connections, and Other Sales Tips from Our Director of Operations

Get to Know Andy Simon 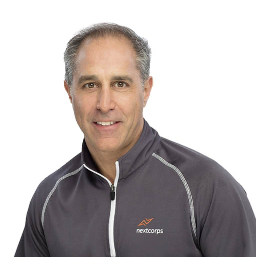 If you’ve ever applied to Luminate, chances are you connected with Andy Simon. Head of recruitment, leader of logistics, and coordinator of all training and consultants (to name a few of many hats), Andy ensures that the startups accepted into Luminate are successful throughout the program.

Before Andy helped launch the accelerator in 2017, he was propelling businesses around the world to record sales growth, including two Swedish music software firms, Toontrack and XLN Audio. As a brand consultant, he launched the digital platform for Brixy, a network of 200+ independently owned and operated baby stores; secured initial accounts for the U.S. expansion of Brännland Cider, an artisanal ice cider producer from northern Sweden; and grew revenues for nationally renowned pet expert, Andrea Arden, his co-founder for the pet toy startup, PupToys.

From writing number one hits for Japanese boy bands, to producing a stuffable bone for dogs, Andy has forged an eclectic career path with a common thread: make the most of your connections.

Here’s a closer look at Andy’s path to Luminate, and his customer acquisition tips for startups.

What led you to your work with Swedish music software?

[AS] I started as a guitar player and songwriter. Growing up, music defined the culture — now technology and apps define the culture. With the advent of Spotify and other streaming services, many people in my position made the lateral move from creative to tech.

When I was working as a songwriter, Sweden was one of the largest music exporters in the world. One day in the recording studio, I was introduced to a piece of really impressive drum sampling software from Sweden’s Toontrack. The studio owner was a friend of the owner, and I asked why they weren’t selling in the U.S. Turns out they didn’t know how to make it happen. I helped bring Toontrack’s EZdrummer to Guitar Center and other U.S. stores, and now they’re the number one drum software in the world.

How did you come to Luminate?

[AS] This is a prime example of leveraging your network to continue to build your career. After my time at XLN Audio, I decided to launch my own startup and I turned to NextCorps, what was then High Tech Rochester. Don Golini was an EIR (entrepreneur in residence), and he became an advisor to my company, Dogways. About a year after I closed Dogways, I knew they were launching Luminate, so I reached out to Don. He asked me to come in and be the digital marketing arm to get initial applicants and build out the program.

My position was always supposed to be temporary, but a couple of months after launch, they had carved out an operations role for me. I was able to step in, even without an optics background, and complement what [Managing Director] Sujatha Ramanujan was doing.

The accelerator itself has grown its network and become stronger each year. When we started, Sujatha and I were covering every role — now we have a marketing and events team, a technology program manager, a lab technician, and we also lean on the support of NextCorps staff. Every team member adds something, frees us up to focus on our core responsibilities, and contributes to a stronger foundation. We’ve built something so that if you come through Luminate, you’re not just going through another accelerator program. We like to say, once a Luminate team, always a Luminate team. Building out our team allows us to provide that long-term support.

How has your own experience launching businesses helped you support Luminate’s startup teams?

[AS] One of the most important things my startup experience has taught me is how to build a team and how to choose a co-founder. With my mobile app, DogWays, I approached Andrea Arden because she’s a national pet expert and social influencer in the pet training space — I took time to follow her on Twitter, get to know her voice and perspective, and then reach out. She became a trusted resource and advisor to the company.  We eventually shuttered the app, but she then approached me to create a product together, something she knew she could use in her practice. I had an instant cheerleader with a huge following for the Comfort Bone.

Launching the app taught me how to start a company — developing a business plan, raising money, securing partnerships, growing a user base. With the physical product, the experience of having created something from nothing is packed with lessons that I share with the Luminate teams. We had to figure out everything from how to source materials, build injection molds in China and then in the U.S., and find engineers to build the product, to pitching to store owners to acquire and grow our customer base, to selling online and through social media. Because I have this background, I can sit down with our teams and work with them on the sales process.

What tips would you share with startups when it comes to sales?

[AS] Understand that a no is the second best thing to a yes. It allows you to move on to the next customer, refocus your value proposition, and qualify prospects better, which is the key step to acquiring customers. Keep moving and keep learning.

At the same time, if you look at everything you need to do all at once, it’s going to be overwhelming. Start with your highest priority and put a process in place to get it done. Whether that’s setting up a CRM, or going after SEO through content like blogging — identify an area that’s going to get you closer to a sale, and go after it.

Ultimately, if you’re an entrepreneur, you can’t wait for anything. You have to go get it. Yes, it takes time to build things, but you can forge relationships today. You don’t have to wait for your product to be done, or for your technology to be approved. You can be meeting people and talking to them and understanding their needs now, and then use that information to get ready to sell.

Lastly, make the best use of your time in one place. If you’re traveling to the U.S. for Luminate, make sure you make other meetings. I was in Frankfurt, Germany for a tradeshow for Toontrack, and while I was there I took a train to Hamburg to co-write with a writer who needed help with lyrics. We wrote two songs and a few years later, one of those songs became a #1 hit for the Japanese boy band, Hey! Say! JUMP.

What mistakes do you see startups make?

[AS] A common mistake I see from startups is being too focused on their technology and capabilities, and not focused enough on the business case. Your technology may be phenomenal, but if no one wants to buy it — or, more importantly, is willing to buy it — then you don’t have a business. No sales, no business.

What do you do for fun?

[AS] I still play guitar, though not as much as I’d like to. I was a ski racer growing up, and I still like to test my limits there. I maxed out at 54 miles per hour two years ago. And if you can go faster than your age, you’re in good shape.