Keep Experimenting, and Other Tips from Our Optical Metrology Technician

Get to Know Gary Nothhard 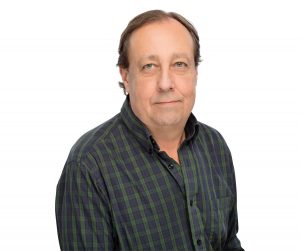 Startups in the Luminate accelerator have described their experience as an “MBA on steroids.” It’s an intensive program where teams receive training on everything from business modeling and employment law to lead generation. But it’s also a program where startups can develop their technologies and innovate alongside our highly skilled staff — namely Gary Nothhard, our Optical Metrology Technician and the face of the Luminate labs.

The co-inventor of nine granted patents, Gary worked on groundbreaking cinema projects through the glory days of Eastman Kodak. Today, when he’s not helping Luminate startup teams test or improve their tech, he’s helping out as NextCorps’ go-to handyman.

Here’s a closer look at Gary’s path to Luminate, and how continuing to pursue what interested him coincides with a lifelong love of lasers.

How did you get into optics?

[GN] As a kid, I was pretty interested in mechanics. I was always getting my hands dirty, working on cars and motorcycles. After high school, I was signed up for the Mechanical Technology program at Monroe Community College, but my experience at an open house changed my plans. When I showed up and saw that all they had at the time were drafting tables, it didn’t look that interesting to me. I walked into the optics lab where they had a bunch of different hardware and lasers set up, and I thought, This looks like a lot more fun.

I graduated from the optics program at MCC in 1980. After taking a summer off to ride around on my motorcycle, someone I had gone to school with connected me with a job at Kodak. I never thought it would be a lifelong career, but this was when Kodak was booming.

What types of technology did you work on at Kodak?

[GN] Kodak used to make and sell their own optical glass, and they had a glass plant at the Hawkeye facility. I started in the Optical Products department as an inspector, examining and measuring lenses. I moved to Optical Metrology Services where we did more specialized technical testing for the Optical Products department. Throughout my time at Kodak, I worked on everything from its disc camera to blood analyzers to federal systems. I ran the laser calibration lab for a time, I worked in the research labs, and I spent my last years there designing and improving the quality of projectors for the Entertainment Imaging division.

The nice thing about Kodak at the time was that it employed about 50,000 to 60,000 people. It was its own city, so you could move around within it very easily. They had hundreds of job openings, and sometimes I’d just want to try something new.

Any highlights from your pre-Luminate career?

[GN] When I was working for Kodak’s Entertainment Imaging division, we developed the first laser cinema projector. Before then, all theater projectors were still film-based. We started designing digital projectors by tapping new technology, and we went through four or five different iterations before we landed on lasers. At that point, lasers were becoming more affordable and available enough to go that direction. Other players got into lasers shortly after, but we were the first. We sold that technology to IMAX, and then I worked for IMAX as a contractor, supporting the commercialization of the projectors.

How did you connect with Luminate?

[GN] I met Sujatha Ramanujan in the research labs at Kodak. She was working on laser writing machines in the engineering physics lab. A few years later, a coworker of mine at Kodak and IMAX ran into Sujatha at an optics conference when she was starting the Luminate accelerator. He shared that our contract with IMAX was just about up, and she needed an optical technician for the lab at Luminate. I was lucky in that I moved right from Kodak to IMAX, and right from IMAX to Luminate, where I started working with the startup teams of the very first cohort.

What types of projects have you worked on with the Luminate startups?

[GN] Our optics lab is equipped to help the Luminate teams build, measure, and test the optical components of their tech. We have these big optical tables and lens holders and mirror mounts for securely mounting optics. We have an interferometer and spectrometer–pieces of equipment you typically see in production settings. The startups can check the quality of their lenses, conduct experiments, and make improvements to their designs.

With the first cohort, I did some work with Arovia when they were developing their pilot product, the Spontaneous Pop-Up Display (SPUD, what’s now Splay). They were having trouble with the lens that went on the front of the projector and not getting the resolution they wanted out of it. So we did some experiments to see how sensitive the lens was and what was causing the problem. It ended not being related to optics at all but rather an issue with the mounting design. It wasn’t mounted rigidly enough, so we made adjustments.

Organic Robotics Corporation [a cohort 2 company with wearable sensors for measuring muscle activity] started off using LEDs. I suggested switching to lasers, and through that upgrade we were able to get better transmission through the fibers. I’ve helped many Luminate companies with lens measurements, some (like Neuresence’s) smaller than the diameter of a toothpick. And I’ve spent a lot of time recently working with SunDensity [a runner-up of cohort 2 and our $1 million winner of cohort 3]. That team is in the Luminate lab almost every day, measuring their smart coatings on our spectrometer.

As an MCC optics grad and someone who works with optics companies today, any advice for students or startups?

[GN] My advice to students is similar to [Technology Program Manager] Damon’s advice. Look at a two-year college like MCC before committing to a four-year degree. It’s a good thing for anybody coming out of high school. You may think you know what you want to do, but you might as well get your basic math, science, and liberal arts done at a place where you have more flexibility to explore your options.

My suggestion to startups is to spend as much time in the lab as possible. Specifically, if you’re coming to Luminate, we may be able to help improve on your idea, even if you don’t think you have a problem that needs addressing.

And, of course, always consider using lasers. I happen to be biased, but lasers are just neat.